a Mission has been a big part of my life here in Berlin since last summer, but strangely enough it’s taken me nearly a year to get around to writing about it on this blog. Maybe I wanted to wait until the first round of multimedia craziness emerged from this performance art collective / music label / magazine, before I started crowing about it. Maybe I was too shy about discussing my own creative work. No, wait…I remember why: I was on the academic job market last fall, which meant that I got nothing else done.

La Mission is a lot of things, including a satirical doomsday cult, a music label, a magazine, an art collective, and a group of dance-music-lovers with a very dirty sense of humor. La Mission’s identity is perhaps best summed up by cult-leader El Jefe’s manifesto/sermon, “The Sermon for the Steps of the Ziggurat in our Hearts,” published in our first La Mission magazine: 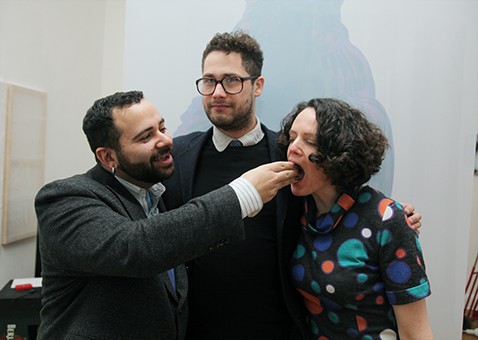 A lovely image of me, Pablo, and Mandie after our second performance piece. Photo by Chris Phillips of Berlin Art Parasites . Click on the image to read their review of the performance.

La Mission was founded by three devastatingly handsome artists, including Pablo “Beaner” / “El Jefe” Roman-Alcalá, Mandie O’Connell, and me (Luis-Manuel Garcia). We all take part in all aspects of the collective’s activities, but Pablo (a DJ / music producer / event promoter) is largely in charge of the music-label aspect of things, Mandie (a dramaturg / playwright / performer) writes and directs the theater performances, and I (writer / music scholar / journalist) take the lead on our written work, including the La Mission magazine. Although we three more or less serve as the creative core of the group, La Mission is very much a collective, actively recruiting new members and inviting contributions to all aspects of our work. Thus far, we have at least 20 people who regularly help as actors, singers, graphic designers, copyeditors, writers, organizational assistants, costume/set designers, or much-appreciated manual labor. In addition, we have a much longer list of those people who have contributed to the cause in a more brief, one-time way. While Mandie, Pablo, and I are more or less holding leadership roles at this project gets off the ground, our goal is to eventually make this collective’s organizational structure completely horizontal.

La Mission has a lot of political commitments. We’re committed to finding ways to make electronic dance music outside of the current capitalist music industry. We want to build utopian communities around music and sweaty bodies. We’re interested in the politics of “brownness” and we’re concerned about ethnic/sexual minorities being written out of the histories of dance music. We’re all for pleasure and queerness and dancing and non-procreative sex—preferably all at once. But perhaps our most urgent political project is to simply remind people that booty-shakin’ music can be political at all. We make this argument over and over in various ways across the work we’ve already produced, but this excerpt from my own contribution to the first La Mission magazine is probably the most concise version:

To all those privileged party kids that want to enjoy their music politics-free, La Mission wants to remind them that dance music was political from the start, dammit. The question of who gets to gather, who gets to dance, who makes the music, who makes the money…these are all political questions. What kinds of fun will be permitted, and what kinds will be forbidden? Which worlds and communities will your music create? How will the music scene work? What’s keeping it together? … A lot of these political questions have washed out of the conversations we have about dance music now. There’s lots of talk about authenticity and vinyl purism and how much everybody hates “mainstream” music (if that isn’t a politically-charged concept…) and so on, but we seem to have forgotten that disco and house used to fill the spaces of refuge for ethnic minorities and sexual outcasts, using sound to imagine the feeling of a better life than this one.

For the year 2013, La Mission’s goal is to release a run of 5 “kunst/WORK” EPs (those are vinyl records, for you young whippsersnappers out there), publish 5 La Mission magazines, and put on 5 “performance/ART” performances somewhere in Berlin. Each installment of each of these three series is timed to appear at about the same time as the others, and each of these installments share a particular theme (like utopianism, music as intellectual property, capitalism) and borrow text, sound, and gestures from each other.

In keeping with the collectivist and participatory ethos of La Mission, this whole project has been collectively funded (“crowdfunded”) from the start, including a US-based Indiegogo campaign, a Germany-based Inkubato campaign, and an absurdist fundraising video (embedded below). We also worked to expand into modes of music distribution that side-steps the conventional “music industry,” such as allowing contributors to pre-order some or all of our upcoming releases through the crowdfunding campaigns. I also spent a couple of days cooking Peruvian food for a massive bake-sale for a fundraising party in the fall, along with food for our second performance run last month. Oh, and we also managed to turn a lewd joke about owning the rights to cumbeards.com (we really do, now!) into an artsy video (also embedded below), which we premiered at our fundraiser.

The first release, “Time is Up Jazz EP” (kunst/WORK 001) has been out since February 2013 and can be previewed from La Mission’s Soundcloud page. Although it’ll probably be available in digital format next year, we’ve really focused on the vinyl release at the moment, working to make it more than just a piece of vinyl. Most importantly, every vinyl release comes with a copy of issue 001 of the La Mission magazine as well as a ticket for performance/ART 001. But there’s more! Each vinyl EP comes with a bunch of La Mission cult-related swag, including a La Mission membership card a packet of “regicide powder.”

The La Mission magazine that came with the first vinyl release is a 24-age assemblage of manifestoes, essays, filthy drawings, self-help quizzes, and propaganda. The core of each issue includes Pablo’s sermon (in the character of cult-leader El Jefe), my semi-serious scholarly essay on booty shakin’ music (as LMGM), and Mandie’s script for the corresponding performance/ART piece. But the magazine also has a number of other regular features, including Comrade Vallinachina’s “Cult Couture” column (on fashion in cults/collectives), acolyte testimonials, strident political manifestos, the bilingual “Brown Corner” (focusing on issues of ethnicity, especially beyond the white/black dichotomy), and a list of suggested readings. And every issue has a slew of one-off content, like a Cosmo-esque “What Cult Leader Are You?” quiz, pornographic drawings, a neurology article, and artist essays. To give you an idea of what we’re up to, check out the table of contents to issue 001 here: La Mission TOC 001

The performances have thus far produced beautiful and compelling images of our project. The first performance, “performance/ART 001: A Non-Aristotelian Drama in Five Acts,” took place at the beginning of February 2013 in the basement of a café, Tischendorf, in the Neukölln district of Berlin. The piece developed most its political and gestural vocabulary out of three sources: the 1976 satirical film Network, the texts from Issue 001 of La Mission magazine, and Mandie’s imagined “Naked Mennonite” utopian community. The piece follows the transformation of a character from Network, Diane Christiansen (played by me, ironically), from fame- and power-hungry type-A news anchor to a member of the Naked Mennonites utopian commune. There’s a lot more to the piece (and it’s not anywhere near as linear as my synopsis makes it out to be), but that’s most of it in a nutshell. While the piece was going on, a nearby television screen played the following video, which represents a similar utopian and erotic transformation, as played by La Mission’s costume designer, Laila Weeks.

We also managed to get some video of the first performance, although the sound-synchronization goes off somewhere around 11 minutes into the piece. We’re still working on fixing that…

Video of “performance/ART 001: A Non-Aristotelian Drama in Five Acts”; video by Julien Barrat

Our second performance piece, “performance/ART 002: Common Revilings,” took place over two nights at the end of April (on Easter Weekend, which we totally forgot about, heathens that we are). The piece actually started with a lecture from me on utopianism in dance music culture, which was then interrupted by the rest of the performance. In many ways, this piece picks up where the first one left off, with many actors reprising their roles or reworking them. This performance also incorporated a sort of Greek chorus of disaffected pretty people, who gradually get recruited to the whole crazy utopian communal ritual by the end of things. The piece culminates in a haunting performance the song “To the Barricades,” set to a poignant duet between signer Magdalena and a recording of her own voice. We don’t have video from the performance up on Vimeo yet, but I’ll post an update here when it’s available.

Since starting operations in the fall of 2012, La Mission has already gotten a bit of coverage, including an interview on Resident Advisor and another one with Local Suicide. The first vinyl release has also been finding its way into local bricks-and-mortar record shops (Oye, Melting Point, Rotation Records) as well as online ones such as Juno Records, Rush Hour Records, Decks.de, and HHV.de. We’ve also had a series of great reviews of our performance-art series, including Amanda Grey of ArtConnect Berlin for the first piece in February and both Amanda of ArtConnect Berlin and Hannah Nelson-Teutsch of Berlin Art Parasites for our second performance last March. The next vinyl release, “The Good Ship” (kunst/WORK 002) is being pressed as I write this, and Issue 002 of La Mission (themes: utopianism, communalism, the human condition) is currently in print. Stay tuned! You can join the La Mission community page on Facebook to keep appraised of our doings, but I’ll also try to post updates regularly here from now on.