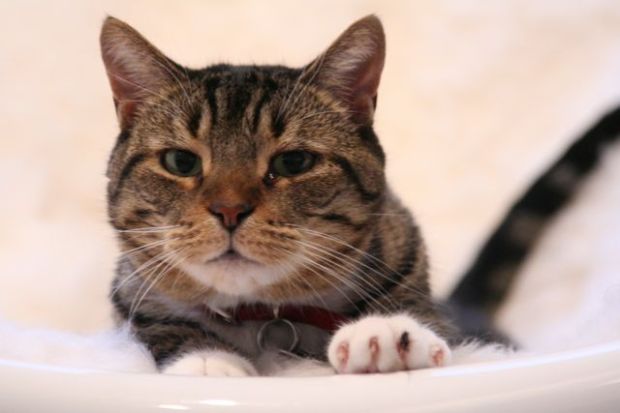 Not the cat in question. My sister’s cat, Petrarch. He makes a good stand-in.

ust yesterday, I was waiting to meet an academic colleague for an afternoon Kaffee und Kuchen (coffee and cake, something of a German ritual). I was out in Dahlem—a southern suburb of Berlin and the home of the Freie Universität—sitting on the outdoor patio of a café at corner of Garystraße and Ihnestraße. Aux Délices Normands, it was called; pretty solid French pastries and cakes, lackluster coffee, pleasant seating.

When I first came to sit down, there was a small, grey-and-white cat sitting on the bench opposite me at the table. It was the cheesiest, most “it thinks it’s people!” sort of cuteness, but I was in the mood for it. I said hello to the kitty and sat down opposite her, putting down my cappuccino and pastry. She looked at me nonchalantly, and for some time we shared a moment of quiet companionship while I drank my coffee and she eyed the activity on the street.

When I opened the paper bag and began to eat my pastry, she lazily pulled herself onto the table and came for a closer look. I closed the bag, put it on the table, and let her sniff around my hand while I petted her with the other. I grew up in a house with cats that had no respect for boundaries, so I was totally unfazed when she decided to lay across the table in front of me, her slowly-twitching tail bumping my cappuccino. We stayed like that for some time—to the bemusement of neighboring tables—me checking my emails on my phone and absentmindedly scratching her head from time to time. It was nice. 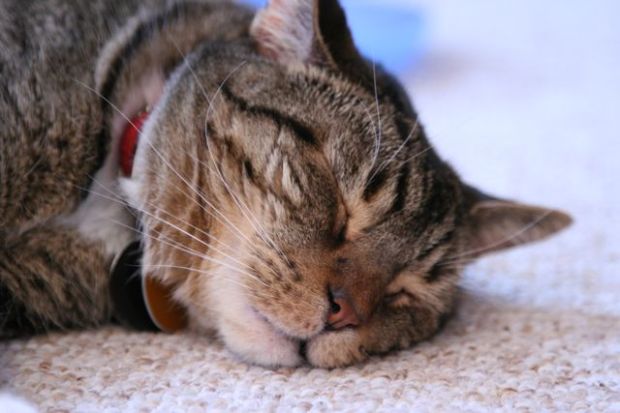 When my coffee companion first showed up and sat down at the table, the cat saw my attention drift away from him, and she promptly got up and walked between us along the table, executing that very cat-ish gesture that seems to communicate: “Whatever you’re doing is unimportant. I am going to purr and present you with my furry ass until you pay attention to me.” At that point, I picked her up and put her on the bench next to me, hoping she would get the point. With cats, of course, they may get your point, but they’re not likely to care about it. After a few more aborted attempts to take over our table, she took off to visit other tables.

Cats are cute, there is no denying it. And cuteness involves themes of vulnerability, helplessness, youth, smallness, and grasping attachment. But cats are also furry little sociopaths, who torture their prey for fun, savage other cats over resources (such as owners), expertly turn on the cuteness when a susceptible human is in range, and adopt and abandon humans as soon as their interest wanes and the food runs out. As soon as I made it clear that I wasn’t going to give her any of my pastry, that cat left me for another table. And when a couple at another table put some coffee creamer in a paper cup and put it on the ground for her, she was all over them, purring and mewling like a kitten and shedding and kneading their legs in ecstasy.  Cats are creatures of negotiable affection. 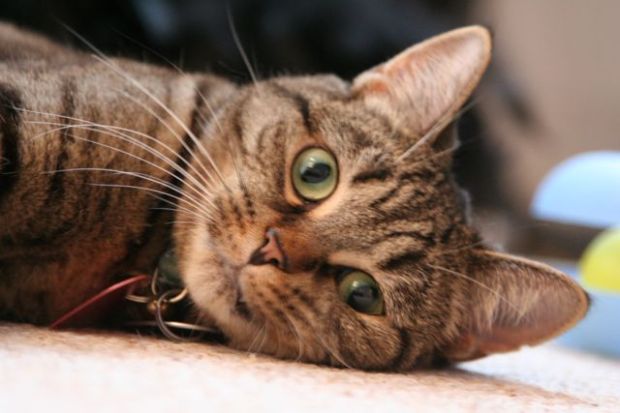 Gabriela. One of her few moments not tearing around my sister’s apartment, destroying things.

A person much smarter than me once defined intimacy by glossing on the verb “to intimate,” that is: “to communicate with the sparest of signs and gestures,” which bestows upon intimacy the “quality of eloquence and brevity” (Lauren Berlant. 2000. “Intimacy: A Special Issue.” In Intimacy, U of Chicago Press). But my encounter with this affectionate but fickle kitty reminded me that gestures of intimacy are actually quite opaque. Such gestures may speak of a desire for contact and connection, but what kind of contact and the purpose of the connection remain mostly unsaid. In human intimacy, too, we sometimes take moments of wordless intimacy as a kind of profound communion—and it can be, sure—but our motivations and can sometimes diverge sharply.

As I’ve argued in my own research on intimacy and belonging in EDM scenes, the vagueness around such gestures of intimacy can often sustain a very real and moving encounter that would not otherwise be possible. But such vagueness leaves an opening that others can exploit in ways that can harm us or diminish us. Filling wordless proximity with emotional closeness leaves us open to disappointment when we stretch the connection beyond the moment. But this is the bargain we make with intimacy.

Speaking of which, here’s a quote I just came across while editing an old chapter draft. This is from a female interviewee in Chicago, reminiscing about her moments of intense contact with strangers on the dancefloor:

These types of connections, they’re different. I don’t know, maybe my counterpart would perceive them in a different way. Maybe they were hitting on me sexually, whatever… But, for me, in that moment, that person is The One. So many times, stupidly, I just fall in love with someone from the first glance. But I will never, ever in my life regret it.